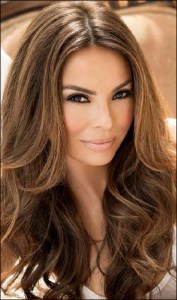 Emmy winning Lilly Melgar is best known for her leading role as the first Latino couple alongside ‘Ricky Martin’ in daytime history on “General Hospital”. She went on to play Claudia Cortez on “The Bold and the Beautiful” and back to “General Hospital” for a short stint as Marcella. She can be seen on the Emmy winning web series, “The Bay The Series”, which was just named one of the best four web soaps to watch by Entertainment Weekly 2015, and her weekly radio show, “Soap Box with Lilly and Martha”. Melgar and Martha Madison were named best hosts of 2014 by Soaps Uncensored. Melgar began her career as a music video host on Univision’s “Tu Musica”. You can also see Melgar in the upcoming bilingual comedy feature, “Tongue Tied”, out Fall of 2015. Additionally, Melgar produced her first feature film, “Black Cobra” distributed by Lionsgate. Her directorial debut was the opening video for The Spice Girls Reunion Tour whereby she has continued directing video content for major concert tours, most notably short videos played throughout the Britney Spears Live: The Femme Fatale Tour. Melgar was also nominated for best lead actress in 2015 from the Indie Series Awards (ISA6) for her work as Janice Ramos on, “The Bay The Series”. Melgar is currently in and producing “Dangerous Curves”.