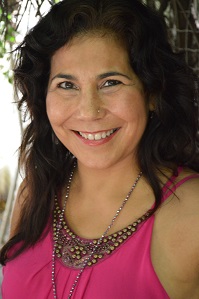 Dr. Stephanie Torres is a Holistic Sexologist, using a body, mind, spirit approach to healthy sexuality. Stephanie is passionate about the importance of healthy sexuality, especially as a part of a yogic lifestyle. She believes that it is our birthright to be happy, holy, and healthy, even in our sexuality.

Born in Los Angeles, California, Dr. Stephanie attended Loyola Marymount University where she completed a Bachelor’s degree in Communication Arts with an emphasis in Film Production.  She worked as Assistant to the Producer on the cable television program “You and Me, Kid”, for the Disney Channel in Burbank, California. She went on to become a successful Account Executive for eight radio stations throughout Northern California and also worked in commercial film editing in Hollywood. Dr. Stephanie has also done some print modeling and has acting experience in radio, television and theatre.

After eight years as a California State Licensed Real Estate Broker, Dr. Stephanie retired to become a health and fitness coach and focus on the cause of combating childhood obesity. As a fitness expert, Dr. Stephanie gained national recognition by being featured on the Fine Living Channel’s program “Radical Sabbatical”.  She’s also gained significant news coverage for her transformational life work.

Committed to body-mind-spirit health, Dr. Stephanie worked at Club One in San Jose, California and the Jewish Community Center in Los Gatos, as a Certified Personal Trainer, Youth Fitness trainer and Fitness Therapist. She’s worked with clients aged four to ninety four, training both high school girls’ field hockey teams as well as assisting elderly clients through the rehabilitation process and support through end of life.

Dr. Stephanie is the co-creator of “The Healthy Body Makeover,” a successful seminar program and support workbook for a 30-day personal transformation using Isagenix products and earned Crystal Executive status for her achievements in the company.

Dr. Stephanie served as President as well as other offices within the Aptos Toastmaster’s club and competed locally, receiving numerous awards for public speaking. Dr. Stephanie’s provided inspirational talks for the Association of Realtors, Rotary Club and other community groups throughout Santa Cruz county.  She also gave a free eight week summer lecture series at the Santa Cruz public library entitled, “Living from my Soul” where she channeled inspirational talks and provided complimentary intuitive readings afterward.

Most recently, Dr. Stephanie was in private practice as a Dakini (sexual-spiritual healer), became a Certified Minister, and completed the full documentation of her life’s journey in a memoir.

Dr. Stephanie has successfully raised two children, who are both now young adults. She received her degree as a Doctor of Human Sexuality (D.H.S.) from the Institute for the Advanced Study of Human Sexuality in San Francisco. In addition, Dr. Stephanie is in the process of obtaining her PhD in Sexology and producing a provocative new musical called, Sex, Love & Yoga.

Passionate about the life-changing effects of Kundalini Yoga, Dr. Stephanie,(also known as Dhyanjot Kaur), is a KRI Certified Kundalini Yoga Instructor. Utilizing the technology of Kundalini Yoga as well as other holistic modalities, she has a private practice in Spirituality and Sexuality Counseling and leads women’s sexual empowerment workshops.