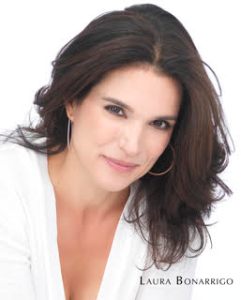 Laura Bonarrigo starred in the Off Broadway run of DANCE OF THE SEVEN-HEADED MOUSE by Carole Gaunt in 2009. Just a few months earlier Laura completed a six month guest role on ABC’s ALL MY CHILDREN as Rebecca Fowler. Fans remember with great enthusiasm Ms. Bonarrigo’s role as Cassie on ABC’s “One Life to Live”. A graduate of Rutgers University, Laura became a member of The Shoestring Players, a professional children’s theatre group, while still in school. While at OLTL Laura had the opportunity to play the Mother in the independent film The Passing with Marion Seldes and Garrison Keillor.

Upon leaving OLTL & giving birth to her son, Laura performed as Trish in Five Women Wearing the Same Dress by Alan Ball. Her daughter was born in 2001 at which time she took a break from acting to raise her children in Manhattan. In 2006 Laura started her own company, Feed Your Mouths helping other moms feed their children healthy nourishing meals & snacks. She works closely with families & individuals interested in changing the way they shop, cook & eat in their own homes.

During the summer of 2007, Laura was cast in the title role of Dorothy in The Rise of Dorothy Hale that ran off-Broadway through January 2008. She has since returned full time to acting & modeling playing Angie in the independent film Concerto ( a Sundance 2009 Selection and Winner of the Hollywood Foreign Press Association Award), Kitty in the Staged Reading of “Otherwise” by Vincent Crapelli with Karen Ziemba and Beth Leavel.