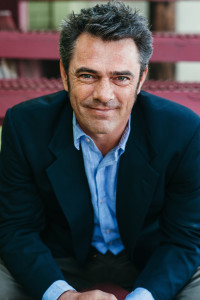 Henry Ansbacher is a four-time Emmy Award winner and Academy Award Nominee for producing films and television series that raise awareness and motivate change around a social or cultural issue. His films have been broadcast on HBO, the BBC, PBS, and leading networks around the world.
In 2000, Ansbacher founded Just Media, a nonprofit organization dedicated to making movies that make a difference, and he continues to serve as the executive director. He has produced 27 films and television projects with topics as wide-ranging as Chiefs, the true story of a Native American Indian high school basketball team struggling to win on the court and in life; Iron Ladies of Liberia that follows Nobel Peace Prize winner Ellen Johnson Sirleaf behind the scenes during her inaugural year as Africa’s first freely elected female head of state; Two Spirits about a hate crime and the rich traditions of multi-gendered people in native tribes; They Killed Sister Dorothy, a documentary about the murder of an environmental activist in the rainforest of Brazil; the 2010 Oscar-nominated documentary for HBO, The Last Campaign of Governor Booth Gardner, an intimate exploration of the contentious subject of physician-assisted suicide; and his most ambitious project yet, American Mustang, an epic 3D nature film that combines narrative and documentary elements to explore the historic, cultural, and political significance of an enduring western icon, America’s wild horse, the mustang.
In 2012, Ansbacher partnered with Denise Soler Cox to co-create Project Enye (ñ), a culturally-based project that uses first-hand and authentic stories to cultivate a sense of identity and belonging among first generation Americans with parents from Spanish-speaking countries. In 2014, Ansbacher and Soler Cox took Project Enye (ñ) online, launching the first community-powered, media-rich site where Enyes (ñ) worldwide can share or view inspiring and generation-specific stories that resonate with the fastest
growing demographic in the United States. Projectenye.com will serve as an everlasting online memoir for this generation and a casting tool for the project’s film and unscripted TV show.
He resides in Denver, Colorado, with his two daughters, Alexandra and Ella, and his son, Max.

May 29, 2015– Henry Ansbacher will stop by to discuss his latest endeavor called Project Enye and how you can get involved.