The Batwomen, Batgirls, and their cohorts are where it’s at in the DC Comics Universe if you want action, heroism, and often-times a healthy dose of snark. There are enough stories and heroes that there’s something for every taste. If you’re looking to dip your toes into the Batverse, below are a few of my favorite Bat stories. Lighthearted isn’t exactly synonymous with the Batverse, but that’s exactly what this volume of Batgirl, featuring Stephanie Brown, is. If you loved Buffy: The Vampire Slayer or Veronica Mars, I’m confident you’ll dig Stephanie as Batgirl as well.

Steph is brave, smart, and in many ways a typical college girl. Except, of course, she’s already got a superhero past as both Spoiler and Robin and has now taken on the mantle of Batgirl. She is determined to save the day whether anyone else wants her to or not; also, she never misses the opportunity to quip while doing so. In addition to Steph’s charm as a lead, Steph’s relationship with Barbara Gordon, the original Batgirl who mentors Steph somewhat begrudgingly, is a highlight of this book.

Steph isn’t the only Batgirl Barbara Gordon mentors. In Silent Running, Barbara takes Cassandra Cain under her wing. This book is thematically darker than Batgirl Rising. At the start of the book, Cass is unable to speak or write. She was raised by a violent assassin and was trained in combat at the exclusion of all else.

Silent Running sees her struggling to find her way in the world and move on from the darkness of her past by taking on the mantle of Batgirl. Because Cass is essentially mute, the story is extremely reliant on visuals as Cass communicates through expression and movement. This makes for a unique story and some extremely memorable moments. 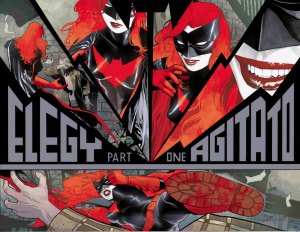 Batwoman: Elegy features Kate Kane’s origin tale as Batwoman. It’s the story of a woman determined to find a way to serve and protect her city. In addition to exploring Kate’s journey as a superhero, the book treats readers to a dark thriller. Batwoman faces up against the Religion of Crime, a cult led by Alice, a mysterious villain who speaks only in Lewis Carroll quotes.

Not only is the story riveting, the art is outstanding, and the two meld in a way that illustrates just how the comic medium can enhance storytelling. This book is the one that started my own journey as a comics nerd, and I cannot recommend it highly enough. This is storytelling at its finest.

If you love a good superhero team, Birds of Prey is a must. Character and relationship development shine in this volume as the members of the team find themselves in situations that test them. This is a group of characters, extraordinary on their own, who become even more extraordinary as a team and a found-family of sorts.

In Sensei and Student, Dinah Lance (Black Canary) travels China to see her dying mentor and ends up in an interesting alliance with another of his protégés, Lady Shiva, who is now an accomplished assassin. Meanwhile, Barbara Gordon (Oracle and, in the timeline of this book, formerly Batgirl), who is sort of the information broker of the DC Universe, finds herself and her operation compromised and teams up with Huntress (Helena Bertinelli) to take on a corrupt politician.

Those are my Batverse recommendations! I’ll be posting more suggestions soon, and I welcome any topic requests. Do you have a favorite woman of the Batverse that I’ve left out of this post? Or a favorite storyline I’ve not included? Let me know in the comments!

The links in the article are to the DC Comics website except for one title, which is no longer available through them, where I’ve linked to Amazon instead. If you haven’t read it already, I have another comics recommendation post featuring the girlfriends of well-known superheroes. And my introduction to comics post has more info on where to buy or, in the case of the library, check out comics!