After signing a publishing deal with Royalty Network, Yonni appeared on B.E.T.’s 106 & Park, as a guest judge on Freestyle Friday for three weeks. Yonni seemed to go into over drive in 2007, he landed several album placements and songs with Birdman, Hell Rell, Mya, Lil Mo, Tum Tum, Trina and again Lil Wayne. 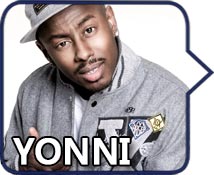 “Say Aah” featuring Fabolous, produced by Yonni and featured on the album “Ready” became the first top 10 hit for singer Trey Songz. The song climbed the Billboard charts including R&B and Radio. The music video and behind the scenes footage reached a combined total of over 2 million hits YouTube. The video for the hit single was featured on MTV2 as Jam of the Week. In 2014, “Ready” was nominated for a Grammy in the Best Contemporary R&B Album category, earning Yonni his first Grammy nomination.

In 2014, Yonni released his latest project titled “If I Want To” which features heavy hitters such as: The Game, Christina Milian, Mya, Jeremih, Rock City and more. The producer has already dropped his first release of 2015, his hit single “SnapChat” ft. Leon Thomas, Eric Bellinger, Rayven Justice and Aroc which is now available on iTunes.

Kroll Call is a weekly, hour long entertainment program that connects the audience to their favorite celebrities, offers advice and expertise on a wide-range of topics, and even lets the audience become part of the show. Kroll Call airs live every Friday at 6pm Eastern/3pm Pacific on krollcall.com and the VoiceAmerica Talk Radio Network. It is also available for free on-demand on iTunes, Stitcher, and krollcall.com.