Comic reading is one of those delightful habits that many people don’t pick up because it seems more complicated than it really is. If you’re an uninitiated wannabe comic reader like I was six years ago, wading into a vast world of ongoing stories and finding your place can feel intimidating.

The tipping point for me six years ago was hearing about the reintroduction of Batwoman into the DC Comics universe. My desire to read about an ass-kicking lesbian superhero outweighed my fear of figuring out the world of comics, and I dove right in.

Lucky for you because now, if you want to jump into the wonderful world of comic books, too, I’m here to help! I’ll cover the basics for new comics readers in this article — things like where to get your comics and the different reading options. In future weeks I’ll be recommending specific comics in a variety of genres and for a variety of age groups. If you have any requests, say you’re just dying to read some spy comics or you’re looking for comics for young adults, please let me know in the comments, and I’ll do my best to cover requests in future articles!

Physical Copies or Digital
I, personally, enjoy hoarding things, so I buy most of my comics in paper form. The plus side is having an impressive collection. The down side is that, after several years, boxes of comics begin to overtake your living space and, if you’re not super organized, finding that specific issue of Birds of Prey you want to reread takes an entire weekend. For those who wish to avoid that scenario, the majority of titles are also available digitally for reading on your computer or tablet.

Trades or Single Issues
Single issues of comics generally come out once a month and contain part of an ongoing story. Trade paperbacks collect several single issues in a larger book form. The issues in a trade are usually a full story arc of series, so one trade can usually be read on its own as a complete story.

In my opinion, trades are easier to get into when you’re first starting out reading comics because you get a full story all in one go without having to worry about having to collect multiple issues. Also, if you’ve never read comics before, you’ve missed many great things. Trades are the easiest way to catch up on older stories.

However, if you just want to dip your toes in and aren’t sure you’ll like a title, a single issue is much less of an investment and can give you idea for the flavor of that particular comic before you invest more time and money. Also, completists may want to know that sometimes not all single issues are included in a trade. So, if you go the trade route, you might be missing out on some stories.

Where to Acquire Your Comics

Your Local Comic Shop
Comic shops have something of a reputation for exclusion and employees with attitude. I’m not saying this is never true, but it definitely isn’t always the case. There are some amazing comic shops and employees out there, and I think they’re far more common than the stereotypical snooty lot people often imagine. If you want to buy physical copies of your comics and have a local shop, I suggest you give it a try. You’ll be supporting your local economy and could very well meet people who will learn your interests and recommend great things for you to read! Also, if you set up a pull list, which is a list of titles they’ll order each monthly issue of for you to buy, many shops will offer you a discount on your comics.

Online Retailers
However, if you live in the middle of nowhere or your comic shop is one of the few that sucks or you don’t care to leave your house, there are plenty of places that will ship you comics. Like local shops, they’ll often have levels of discounts depending on how many books you subscribe to. My favorite online shop for ordering physical copies is Atomic Empire. Things From Another World is another good one.

Once you become obsessed with a specific book or character and want to read everything that they’ve ever been in, and I’m speaking from experience here, eBay will be your best friend. It may take some searching and patience, but you can often snag sets of comics for good prices, especially if you’re not super fussy about them being in mint condition.

Obviously, online is the way to go for digital comics as well. Comixology has the largest selection of digital comics. You’ll find comics from Marvel and DC as well as tons of smaller and independent presses as well as creator-owned comics.

The Library
If you are low on funds but still want to give comics a try, fret not! Most libraries carry a decent selection of trade paperbacks. You may not find more rare or independent titles but your library is likely to have at least some popular titles in trade. If you can’t find what you want at your library, ask! They can likely get you some comics through interlibrary loan or order some.

There Are Comics for Everyone! 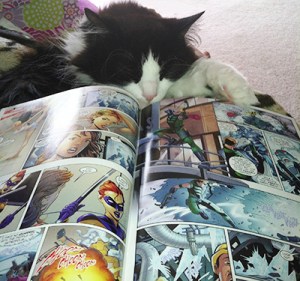 This picture of my cat reading Smallville proves comics are for everyone, even felines.

Finally, if you’ve got any preconceived notions about comics not being for you because they’re only for the exceptionally geeky and you think you don’t qualify or they’re only about superheroes and superheroes aren’t your thing, you’re wrong. Sit with your wrongness for a moment; now let it go and come back to me.

Whether you love superheroes, spy stories, coming of age stories, romance, ghost stories, horror, or any other little thing you can think of, there is a comic out there that caters to your interests and will delight the bejeezus out of you. I promise it! I’ll try to point you to some of those in a series of articles with comics recommendations in the coming weeks. Again, if you have any requests for specific genres or any questions I didn’t cover, let me know in the comments.