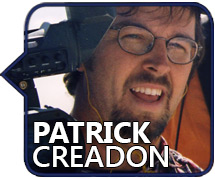 Patrick Creadonwas born in Chicago and is a 1989 graduate of the University of Notre Dame, and earned his Master’s Degree in Cinematography at the American Film Institute. He began his career as one of the youngest cameramen in the history of PBS, shooting and producing cinéma vérité style stories for the critically acclaimed series The 90s. In 2006, his directorial debut, Wordplay was the breakout hit at the Sundance Film Festival. His follow-up film, I.O.U.S.A., also premiered at Sundance and was shortlisted for the Academy Awards. Patrick has served on several film festival juries including Sundance Film Festival, the LA Film Festival, and the Ashland Film Festival. In 2011, he debuted as a television director on Law & Order: Special Victims Unit.