Emmy® Award-winning Stylist and Best-Selling Author David Zyla empowers thousands to discover their authentic style and show the world who they really are.

David Zyla has long advocated that there exists no one color or item of clothing that flatters everyone and makes them feel their absolute, confident best. He believes that every human being possesses an individual palette of flattering colors and a style that is uniquely their own. By honoring and wearing these colors, found in our eyes, hair and skin, we not only illuminate ourselves, but we build the confidence needed to attract love, enhance our power, restore our energy, make a lasting impression and show the world who we really are. Much more than just fashion, David’s platform is about embracing the most authentic, very best versions of ourselves, using color as the foundation. 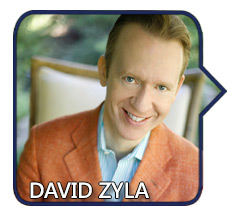 A sought-after guest speaker and lecturer on the transformative power of color and its application to wardrobe, home and lifestyle, he is known for his engaging, educational and fun presentations that include spot-on (and always non-judgmental) “style reads” to attendees based on their individual coloring. Audiences respond enthusiastically to his inspirational tone, humorous cajoles, and encouragement with tips and suggestions for them on how to “always be the best versions of themselves!” Recent speaking engagements include events for Barron’s, Saks Fifth Avenue, The National Arts Club, The Cosmopolitan Club, Clarins, Dress for Success, Lord and Taylor, DKNY, Bloomingdales and Macy’s.

David Zyla’s unique platform on style makes him a frequently quoted authority on fashion and color in the media. He has been featured in a variety of broadcast media including The View, The Nate Berkus Show, Martha Stewart Living Radio, The Jane Pauley Show, Playboy Radio and CNN Style. He has been profiled in People and The New Yorker, and his work has been featured in publications including Life & Style, USA Today, Traditional Home, Cosmopolitan, Women’s Wear Daily, Brides Magazine, Good Housekeeping, Reuters, The Chicago Tribune and The Los Angeles Times.

His book The Color of Style was published by Dutton on February 4, 2010, and was followed by the paperback Color Your Style published by Plume on January 25, 2011.

Starting in 2001, Zyla held the position of head costume designer for General Hospital, Port Charles, and most recently All My Children for which he received the 2010 Outstanding Achievement in Costume Design Emmy Award. For twenty years, Zyla has also designed shows for Broadway and regional theatre productions, as well as commercials and film. He has collaborated with some of the most recognizable faces of contemporary culture including Hillary Clinton, Tom Hanks, Carol Burnett, Neil Patrick Harris, Susan Lucci, and Kelsey Grammar among many others.

David Zyla’s background began in fashion design. At age 22, Zyla started his own Seventh Avenue label. The cutting-edge designs of the international Zyla evening wear label were featured at New York’s Fashion Week and sold at the nation’s chicest stores, including Bergdorf Goodman and Henri Bendel. Zyla was then courted to bring his reputation as an edgy designer with strong ties to the global fashion community to ABC, spearheading the producers’ efforts to reinvigorate the visual quality of daytime television.

Pick up a copy of David’s book,  The Color of Style: A Fashion Expert Helps You Find Colors that Attract Love, Enhance Your Power, Restore Your Energy, Make a Lasting Impression, Show the World Who You Really Are available in paperback and Kindle versions.

November 21st, 2014: David offers his advice on How to Win at Shopping on Black Friday and every day