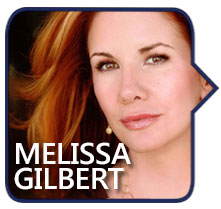 For nine seasons, she was known to audiences as “Half-pint” Laura Ingalls Wilder on Little House On The Prairie and she’ll be returning to primetime in early 2015 on the ABC mid-season series Secrets & Lies. In addition to numerous other television and film projects, Gilbert also served as President of the Screen Actors Guild and appeared as a contestant on the reality dance competition, Dancing With the Stars.  Melissa recently released My Prairie Cookbook: Memories and Frontier Food from My Little House to Yours, a collection of comforting family recipes and personal photographs and anecdotes. My Prairie Cookbook is available in hardcover and Kindle versions.

ON TV:
Melissa will appear on the ABC mid-season series Secrets & Lies, a premiere date has not yet been set,

ON KROLL CALL:
October 17, 2014 – Melissa discussed the release of her new cookbook, My Prairie Cookbook: Memories and Frontier Food from My Little House to Yours