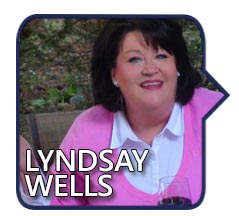 Lyndsay Wells is affectionately known as “The Kitchen Witch”

Lyndsay Wells is a professional trainer, writer, and program developer with a passion for food and cooking. She is an award winning recipe developer, a cooking show host, and a website ambassador for Kraft Foods Canada.In 2011 her recipe for Pistachio and Couscous Stuffed Pork Tenderloin won the $20,000.00 grand prize for entrees in a contest sponsored by Kraft Foods “The Real Women of Philadelphia.” It was prepared by the executive chef at Scarpetta restaurant in Toronto for guests that included Celebrity Chef Anna Olson, and Rosie Edeh from Entertainment Tonight Canada.

In 2012 she appeared on the Food Network show Recipe to Riches. Lyndsay believes cooking should be approachable and easy and has great tips and ideas for putting together sophisticated looking dishes that cooks of all levels can accomplish.

Keep up on all of Lyndsay’s kitchen concoctions and masterpieces at LyndsaytheKitchenWitch.com

October 24: Quick and easy Halloween snacks to take the trickery out of your treats, including  Butterscotch Cinnamon Apple Crescents, Brine for Moist and Succulent Chicken, and Lemon Herb Butter.

November 13: Ideas to help make your Thanksgiving dinner cooking a little easier, from what things you should prepare ahead of time to nifty kitchen witch magic tricks to speed up your prep time.