Some girls have all the luck, even if they’re unlikely to count their blessings as blessings. Rayna James, for one, probably didn’t consider her love life to be particularly charmed at the end of Nashville’s second season. Who needs the drama of getting a pair of unexpected marriage proposals – both in one night? Oh, the turmoil of being torn between two handsome, talented suitors!

She wasn’t torn for long. During Nashville’s September 24 season-three premiere, the country superstar made a move that was a lot smarter than launching her own record label in this era of diminishing album sales. She let go of the stone that had been weighing her down: her past – namely, an ex named Deacon Claybourne, would-be fiancé Number 2.

That’s something people on daytime soaps rarely do for good (see “Villy” on The Young and the Restless, “EJami” on Days of Our Lives, “CarSon” on General Hospital, etc.). But while I’m not convinced that Deacon is completely out of Rayna’s picture, I applaud her for at least trying to put away their broken frame.

I have to admit, I wasn’t previously a big fan of Luke Wheeler – Rayna’s choice…for now – and I’m still not. He’s uncomplicated, and he’s got sexy swagger, but he’s a little too smooth, a textbook cowboy. I’m also wary of hot tempers (one of the reasons why I’m not loving Abigail with Ben on Days, although he’s her sanctimonious equal), even when the exploding guy is otherwise charming and easygoing.

Luke scored with me, however, when, unlike Deacon, he gave Rayna time and space and didn’t pressure her into choosing his marriage proposal over Deacon’s. Good move, one that clearly wasn’t lost on Rayna. When she let Deacon down gently by citing the “clean slate” she has with Luke, she made a lot of sense. For those crying “They’re soul mates!” and “He’s changed!” in defense of Rayna and Deacon, let us not forget that his alcoholic relapse as recently as the end of the first season nearly caused Rayna her career and her life.

The threat of relapse will forever be a dark cloud hovering over them, and I’d much rather live under mostly sunny skies. There’s nothing like shared romantic history and a teenage daughter to keep you in an ex’s orbit, but sometimes love is better – and safer – the first time around, when it’s still baggage free. (I wouldn’t have minded seeing first-time sparks fly between Deacon and Rayna’s exiting sister Tandy because it would have made for some juicy sibling rivalry and given the shamefully underused Judith Hoag something better to do.)

Deacon’s niece Scarlett O’Connor seems to have inherited his knack for romantic repetition. Loving Avery Barkley was easier the second time around last season, but it didn’t last long, due to lack of spark. We all know that’s as good as the kiss of death in serial dramas. Turbulence makes the world turn. Stability is as boring as a good guy. Take Daniel Grayson over on Nashville’s fellow ABC nighttime soap Revenge. Neither he nor his scenes with Emily Thorne (nee Amanda Clarke) were ever more interesting than they were after he shot her in the stomach on their wedding night. Of course, that was after their dreaded second courtship.

I’d like to say it’s over for good between them – how do you come back from firing the bullet that renders your now-ex-wife unable to bear children? – but we know how soaps work. Sami once shot E.J. in the head on Days, and they still have a shot at happily ever after.

But getting back to Scarlett’s fever (a love hangover that I wish was caused by record producer Liam McGuinnis, who brought to Nashville what it needs most: a sexy bad boy with a heart of slightly tarnished gold), I don’t think things have cooled completely between her and Avery, judging from how he still looks at her. It’s the same way her other ex, Gunnar Scott, gazes at her, all awe and admiration, despite his now-semi-long-distance relationship with Zoe Dalton. He even got hard-headed Scarlett to stick around Nashville.

Despite all the chemistry in that quad, the “Will they or won’t they – again?” angle has gotten moldy. Juliette Barnes and Rayna make a far more interesting pair than any configuration of Avery/Scarlett/Gunnar/Zoe, and Nashville did begin as a rivalry between the country queen and the rising princess. That, sadly, has been backburnered. Now they’re more occasional frenemies, a sometime Sami and Kate on Days, with less scheming.

Their relationship has as many fascinating layers as any of their romantic entanglements, and it’s a shame that they have yet to share a single scene this season. In the absence of Rayna, I’d rather watch Juliette’s inner life unfold than her love life. I’ve convinced myself that her slow unspooling as she cried all over “Crazy” while auditioning to play Patsy Cline was about more than Avery. Redemptive you-make-me-want-to-be-a-better-person romance – like the one she shared with Avery, her ex and possible baby daddy – is a snoozefest. Anyway, true love means accepting someone as is, which is generally more likely to happen with someone new.

I don’t want Juliette back with Avery any more than I wish him on Scarlett, who is probably the Nashville character I care about most. That’s as much for her moral compass as for that steely magnolia thing Bowen brings to the character. I once read an interview with Brokeback Mountain director Ang Lee in which he described one of his stars, Michelle Williams, as having a sympathetic quality that makes you want to see her be okay. That’s how I feel about Scarlett. For me, she is to Nashville what Sharon Newman is to Y&R, what Elizabeth Webber is to GH, what the writers want Abigail Deveraux to be to Days. Thus far, Abigail is the only one who is trying out the Rayna road to happiness, while the days of the others’ lives continue to revolve around their exes. 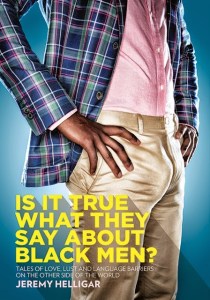 Unlike primetime and daytime heroines, I’ve never been able to share much of a storyline with any of mine, though I’ve tried at least twice. (Luke Spencer was right: people don’t change; they just get older.) I’m not saying that reunions can’t click, but try and try again becomes less likely to succeed with each failed attempt, as GH’s Lucky Spencer eventually learned. How do you think he ended up as Avery on Nashville?

Jeremy Helligar is a Cape Town-based journalist and the author of Is It True What They Say About Black Men?: Tales of Love, Lust and Language Barriers on the Other Side of the World (November 4, Amazon.com), a travelogue memoir about his life and loves abroad.